Saturday, finally the weekend. After a long and relaxing vacation week, the weekend. Haha, since everyday felt like a weekend it made no difference to us. But lots of people in the village turned out that day because it was the big day of the church fair! It was ‘Peter and Paul‘ weekend and all the church highnesses were expected to celebrate.

We decided after a late breakfast to visit Pappa’s Beach again. It is a lovely little place, in a cozy nook. The two pine trees make it homely and quiet. The problem with the bill not withstanding, we wanted to give it another chance. And I am glad we did. We spent a beautiful day at the beach again, definitely worth of a Saturday. And no more problems with the bill, very correct the second time. 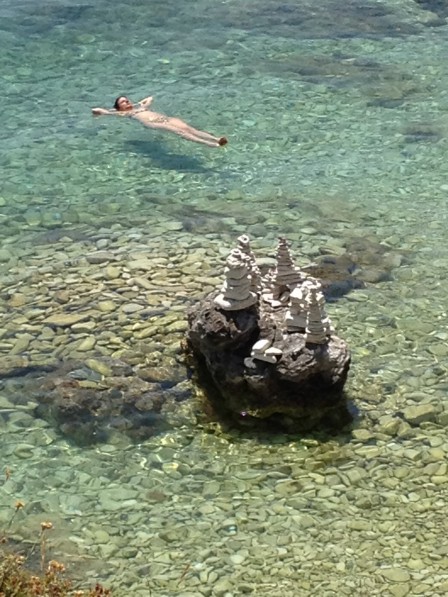 In the evening we were facing the same problem again as before. Will we watch the first or the second half? We decided on the first, then rushed to the hotel, shower, hydrating (skin not body, the beer we already had), changing and then back to our bar. In the end there was no need for any haste since the game went into over-time and eventually penalty shooting. What a sad way to end a game, I would have liked Chile to win.

So around 10pm we made our way to the fair, having heard so much about it and seen the procession in all its glory walk around the village.

Only to realize at the fair after the extremely nerve-racking game that they have not been waiting for us.

I know the picture is a bit dark but be assured that it was packed. The whole village has turned out. In summer they a respectable number of 600 inhabitants (in winter 350), so I don’t know where all these other people came from. The line-up for the Souvlaki was long and we were not hung up on them anyway, so we decided on the spur of the moment to go back to the place where we had dinner the first night.

The first night we passed it on the way through the village and then on the way back just met a couple coming outside telling us that it’s very good. Which it was, it just had a very typical and basic style and we didn’t realize that it was the most authentic place. Maybe that’s why we tried a lot of different places meanwhile. But Andrea and I had already talked about going back there again. And after our horrible culinary experience the day before we needed great Greek cooking . It might not be imaginative, but in its simplicity it’s magnificent. Fresh ingredients put together make out of a simple meal a great one! Yours, Pollybert 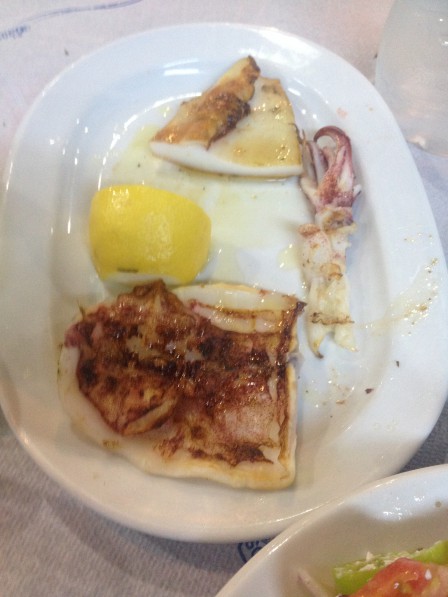 PS: I forgot to take a picture of the name of the place and don’t remember it. But it is the second last restaurant in Ireon direction Pappa Beach, and it shows a seagull in its sign.